You will have, by now received an email with the June edition of the NSBC Newsletter.

If you missed it, you can find it (and all previous Newsletters) by clicking on Newsletters

Don't miss our jolly President's take on how the club is doing - reproduced below.

Have you ever bought something really stupid, late at night, when you were struggling with some kind of mild food poisoning that impacted your brain? Liquids can be especially bad for this. One time I woke up and found I’d bought a sauna off the Internet (true). This time it wasn’t so bad, it was only a tennis umpire’s chair. 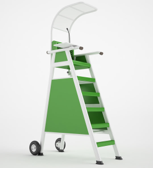 Now, there was some kind of warped logic to this purchase. With so much going on at the club I thought that in order to make it successful I should stay out of the way. However, as president I am expected to be nearby to shout words of encouragement if required. What better location than atop an umpire’s chair where I could see The Willis and East Lindfield as well as have a laptop logged into RealBridge. Even then I had space left over for a book and a small bottle of something. I was born to this.

I climbed up into my chair to survey the NSBC empire and I heard someone shout “You cannot be serious!” I looked around for John McEnroe but all I could see were club members commenting on me being president. I don’t mind it when they shout up at my umpire’s chair, at least it gets them away from the front of my house.

As soon as I had settled into my chair, I had to climb down again and visit the bank with our treasurer Rod “Numbers” Owen. We needed to register with the government and change over the signatories for the bank accounts from the previous president and treasurer (David and Les) which required us to attend in person.

You are probably all familiar with the joke about the lady going into the bank and being asked to identify herself. She pulls a small mirror out of her handbag and looks in it. “Yes, that is definitely me.” she says.

Turns out that is a true story.

In order to get access to the vast fortunes of our bridge club I required my own driving licence and a copy of the Minutes of the AGM noting that I was the new president, which I printed myself and signed. (I also needed David Fryda’s signature which the lady behind the counter actually recognised and accepted as genuine, but that somewhat ruins the story).

So not only am I the president of NSBC with access to our bank accounts, but by some careful use of a printer and a pen, I am (as far as the government and a number of local banks are concerned) also the president of rather a lot of other organisations in the area. I’m still trying to find one with a decent amount of cash in reserve though.

Speaking of printers, from my umpire’s chair I’ve been watching our manager Mike along with “Numbers” and Ian “Lunch” McLaren doing a lot of stuff with printers recently. In our efforts to return to profitability, printers have been a rather unpleasant area of concern. My suggestion to use them to print money was not well received. I had hoped there would be an end to this story in time for publication, but it is ongoing. I am sure David Fryda, our last president, would chuckle at this and say, “I thought the same at this point in my presidency.”

Meanwhile at the bridge club…

Janie “Don’t Talk About Me in the Newsletter” Russ, had the whole committee come to her house for a meeting. From what I hear, it went well.

Jake “Brains” Andrew and Shaz “The Lightning” Thompson were on the red cordial for the whole month. Carol “Captain Marvel” McMurray was in there geeing them up too. Luckily, I was just sitting up in my umpire’s chair. I could say I was watching the whole thing in detail, but really it was more like Vivid with the speed and colours flying around below me.

You can, and should, read a lot more about the survey and the strategy in the other articles in this newsletter. It’s really good stuff! The only thing I want to emphasise is that we really appreciate the time people spent on completing the survey, and we are listening to the feedback. Normally the president doesn’t like to be upstaged by their committee, but frankly I would have been out done by an upside-down tortoise and it is great to have such a strong committee.

I mentioned the time people spent on completing the survey, but I think I spent more time than anyone. Not just because I am a very slow typist but more the sheer number of responses I had to fill in. I spend days sitting in my umpire’s chair using different coloured inks and different handwriting to try to make it look like they weren’t all done by me. As there wasn’t a specific question about it, I had to use the free format answers to achieve my goal, “I fink we has the bestest president eva”, “No other bridge club has such a tall leader”, “I saw Mark save a kitten from a fire”.

Back when I was middle-aged, and the world had higher standards, John Brownie was the president of our club. I used to watch him help the director giving out the boards at the sessions he played in, when he wasn’t washing leper’s feet. I thought to myself “I should give that a try”.

Ian “Postcode” Plummer saw me and said, “I got sacked from that job for getting it wrong”. I shook my head, how can you give out boards and get it wrong.

I asked one of our most resilient directors, Sue “No Problem” Crompton if I could give out a few boards, and she wasn’t quick enough in saying no.

The first time I did it, it was perfect. The second time Sue had to get everyone to wait in the car park while she sorted out the mess. NSBC 2022 05 May Mgt eNews Club Management      The third time I just sat in my seat in shame as Ian came by and handed three boards to our table, “Thanks for getting me my job back!” (true story)

It is important for a president to know everything about their club. For example, did you know we are the second oldest NSBC bridge club in Australia? Northern Suburbs Bridge Club in Queensland beat us by a mere 47 years. (I found this out when I went to the bank with my driving licence and a copy of their latest AGM Minutes signed by me, and claimed to be their founding president.)

Anyway, in my attempts to understand the club better, I found out that we have almost certainly the best teaching program in the galaxy (actually, I knew that already, everyone does), so I caught up with our champion triumvirate of senior teachers: Anita Curtis, Liz Wilkinson and Kay Moyes this month. Not all at once of course, I summonsed them individually to stand at the bottom of my chair. I was too scared to come down.

I was keen to understand more about teaching at NSBC (this one, not the other one, silly) and it turns out it is pretty awesome. However, I only know that from feedback from others, as all three of them, having played against me before, assumed I was looking to learn how to take a finesse and count high card points. I pretended I knew all this stuff already, but I made some pretty good notes if anyone wants them.

If you feel left out because you don’t have a “middle” name, let me know and I will include you in future episodes. I weirdly met “Virtual” Gary Barwick in person at another bridge club this week.

When I finally get down off this chair, I may need help.